Until last month I have never had reason to call my insurance company and make a claim. That all changed when the other half was rear ended on a roundabout by a truck that didn't stop and fled the scene. Thankfully she got the registration number and company name off the side of it so there was hope of getting the damage paid for without having to pay the $500 excess. 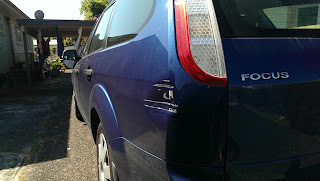 The damage wasn't huge but i don't take kindly to people damaging my things and disappearing so I was determined to get it sorted properly. The rear mounted dash cam had stopped recording days before so I had no video evidence. See some of my other blog entries about what I think about budget dash cams.

First stop was the police station to report the crash and the failing to stop. Next was the phone call to the insurance company. 10 minutes later and the claim was processed, rental car arranged and the process explained of how and when the car would get fixed. Simple and efficient.

I also called the company who owned the vehicle who caused the damage. The guy was very defensive and refused to give me any insurance details. Not to worry I thought, the claim recovery department of my insurance company would get things sorted.

Time came to drop the car off for repair. They checked the damage, gave me keys to the rental and said it would be fixed in a few days. The next working day they called to say it was all fixed. Very impressed with that and the quality of the repair, less impressed with the fact that they hadn't managed to sort claiming from the third party leaving me to pay the excess. Apparently they were refusing to talk and not answering calls. That made me pretty wild so I got back onto the company owner and he was still being difficult. I made him squirm a bit though and here's the highlight of my conversation with him:

That conversation didn't resolve things so I made a plan of actions to get things resolved. This plan included:

If you're in a similar situation and manage to get a registration number but no company details you can look up the owner (for the cost of a few dollars) via carjam. This only works for business vehicles, private individuals details will not be disclosed. You have to get those from the Police once they have investigated the incident.

Speaking of the police, a nice bonus outcome was a letter that arrived in the mail yesterday. Not only did I get my excess refunded, the offending driver got a ticket for driving like a dick! 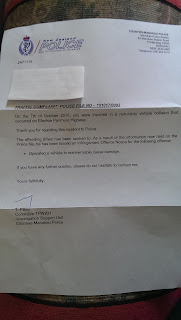 So my advice is to persevere until you get the right result. Make it known to the third party that you're not going to leave them alone until things get sorted and stick to a plan of action that's going to get results.
Posted by Unknown at 19:58